Skip to content
Gamification – the application of typical elements of game playing (e.g. point scoring, competition with others, rules of play) to other areas of activity, typically as an online marketing technique to encourage engagement with a product or service. I would like to share some motivation to play games according to Octalisys gamification framework. 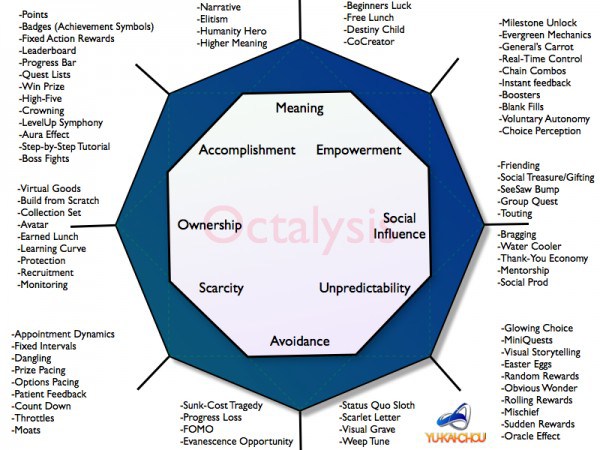 Drive for making  progress, developing skills, achieving mastery, and eventually overcoming challenges. “Badge or trophy without challenge is not meaningful at all”

Users are engaged in a creative process where they repeatedly figure new things out and try different combinations.
Example:

Elements that motivate people, including: mentorship, social acceptance, social feedback, companionship, and event competition and envy. When you see a friend that is amazing at some skill or owns something extraordinary, you become driven to attain the same.

Wanting something simply because it is extremely rare, exclusive, or immediately unattainable.
Example:

Being constantly engaged because you don’t know what is going to happen next. When something does not fall into your regular pattern recognition cycles, your brain pays attention to the unexpected. Often misunderstood it as the driver behind points, badges, and leaderboard mechanics in general.
Examples

Motivation to avoid something negative from happening.
Examples:

Gamification by octalsis framework to increase motivation to play with your product.